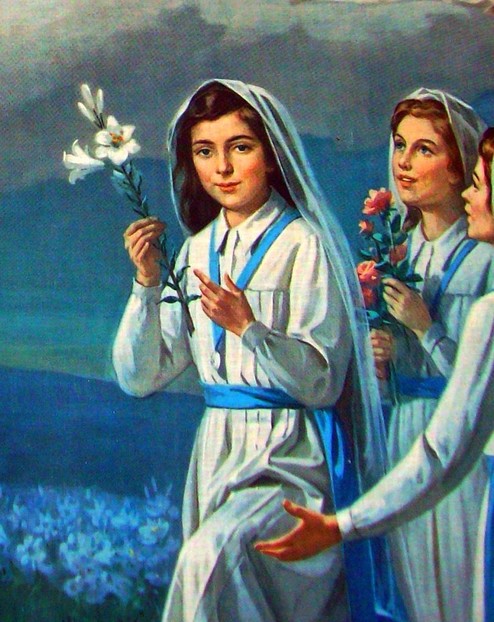 Laura was born in Santiago, Chile, in 1891. Laura's father died suddenly when she was still just a small child. Mrs. Vicuna, with her two daughters, sought refuge in Argentina. In 1900, the Salesian Sisters welcomed Laura Vicuña into their college in Junin de los Andes. The following year, Laura made her First Communion, and like St. Dominic Savio, she took the resolution to love God with her whole heart, to mortify herself and to die rather than sin. Laura wanted to make Jesus known and make reparation for the offenses Jesus receives.

When Laura realized that her mother was living in a sinful situation, she offered her life to God for her mother's conversion.

Fr. Crestanello, the first to write a biography of Laura Vicuña, tells us, "Laura suffered secretly in her heart... One day she decided to offer her life and to accept death willingly, in exchange for the salvation of her mother. She begged me to bless this ardent desire of hers. I hesitated for a long time." Laura grew in virtue and, with the consent of her confessor, privately vowed to live the three vows professed by religious Sisters, poverty, chastity, and obedience. Worn out with sacrifice and ill health, she died in Junin de los Andes, Argentina, on January 22, 1904.

During Laura's last night, she confided to her mother: "Mommy, I am dying! I asked this of Jesus, some time ago, and offered my life to Him for you, that you might return to God... Mommy, will you give me that joy before I die?" On the day of Laura's funeral, her mother returned to the Sacraments and began a new life. Laura Vicuña's remains lie in the chapel of the Salesian Sisters in Bahia Blanca, Argentina.

On September 3, 1988, on the Young People's Mount of the Beatitudes, in the presence of thousands of young people, and in the year of the 100th anniversary of John Bosco's death, St. Pope John Paul II beatified Laura Vicuña. St. John Paul proposed her as a model of evangelical courage, to the point of giving one's life, for the mission of salvation. Her feast is celebrated on January 22.

Bishop of Trenton, David M. O'Connell, shares about the life of Blessed Laura Vicuna in this great video for youth.

Learn about Blessed Laura Vicuña, the patron saint of young people and those with difficult family situations.

I want to do all I can to make God known and loved.