Life of St. Teresa of Avila 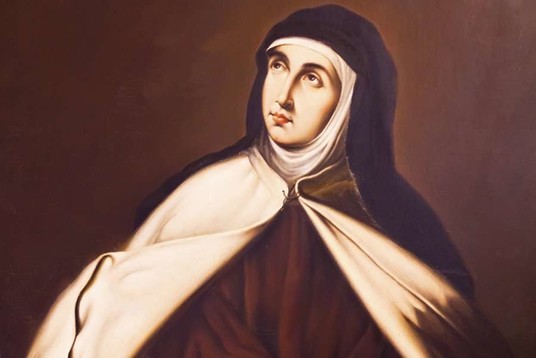 St. Teresa of Avila, also known as St. Teresa of Jesus, was a prominent Spanish mystic and was born in Avila, Spain in 1515. Teresa was a reformer of the Carmelite Order and the foundress, with St. John of the Cross, of the Discalced Carmelites.

When Teresa was 14, her mother died, causing the girl a profound grief that prompted her to embrace a deeper devotion to the Virgin Mary as her spiritual mother. Teresa was a very talented young woman and at eighteen, a striking Spanish beauty. She decided to become a nun, but was unable to obtain her father's consent. When she was twenty, she left his house without his knowledge, to join the Carmelite Convent of Avila. Her father relented and she was professed the following year.

God called her to be a saint early in her religious life, but she did not respond fully to this first call. During many years of trials and suffering, her perseverance in prayer and meditation on the Holy Bible prepared her soul for a loving, eager response to the promptings of the Holy Spirit.

In 1562, at the age of forty-seven, she began the reform of the Carmelite Order with the founding of the first convent of strict observance in Avila. Some dozen foundations followed in rapid succession all over Spain.

In a period of spiritual growth and deep meditation, Teresa received the gift of visions and distinct commands from Our Lord, and her heart was pierced with divine love. The memory of this episode served as an inspiration throughout the rest of her life, and motivated her lifelong imitation of the life and suffering of Jesus, epitomized in the motto usually associated with her: “Lord, either let me suffer or let me die.” St. Teresa's friends suggested that either she was having diabolical visions or that perhaps she had lost her mind, and so she acted only under obedience to her confessors, which made her strong and safe.

Teresa is one of the foremost writers on mental prayer, and her position among writers on mystical theology is unique. Her books, written largely for the guidance of her new religious sisters, are full of deep spiritual insight and a rare degree of practical common sense.

In the Liturgy of the Church, she is the only woman entrusted with the office of teaching and feeding the faithful. Her heavenly Spouse called her to Himself on October 4, 1582. After the usual searching investigation of her life and writings, she was declared to have been a saint on earth and canonized by Pope Gregory XV in 1622. In 1970, St. Theresa was declared a Doctor of the Church because of her extensive and insightful writings.

Let nothing perturb you, nothing frighten you. All things pass. God does not change. Patience achieves everything.